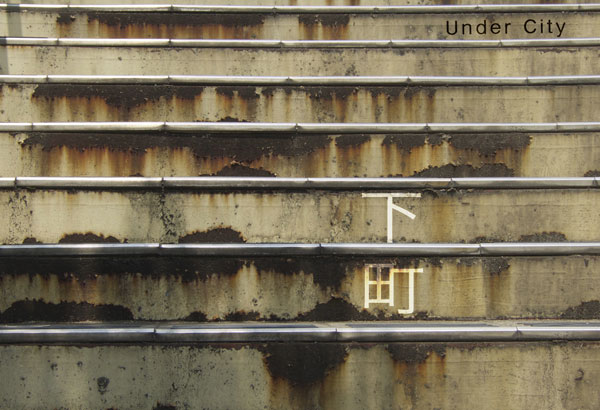 Yamanote (山の手, meaning “mountain’s hand(s)”) and Shitamachi (下町, meaning “under city”) are traditional names for two adjoining areas of Tokyo, Japan. Yamanote refers to the affluent, upper-class areas of Tokyo west of the Imperial Palace, while Shitamachi is the name for the marshy, physically low part of the city to the east of the Sumida River.

The two regions have always been vaguely defined, as their identity was more based on culture and caste than on geography. In modern times, the division lives on, with the Yamanote samurai having been replaced by white-collar professionals and business executives, while Shitamachi is now associated with start-up entrepreneurs, restaurant owners, small shop proprietors and artisans’ workshops.

Lower City ‘zines – replica of lumen print with Japanese and English text. 3 versions, each an edition of 10.

The Lower City artists book explores the urban landscape of Shitamachi, accompanied by quotes from the Kokin Wakashū (古今和歌集, “Collection of Japanese Poems of Ancient and Modern Times”) translated by machine into English. The Kokin Wakashu is considered one of Japan’s National Treasures, and dates back to the Heian period, published around 905 CE.

Drum leaf binding with slip cover and envelope. (Edition of 5 – Sold out)

A further artists’ book about the Yamanote area is planned for spring 2017.